It's pretty bad when people text/email you
to remind you that you need to blog.

Last week was business as usual...

Three days of kids and two days of trying to get things done.

My phone is being cantankerous, It's holding my photos hostage.

I did manage to snag one photo...

Her game is to take the game into Pappy K's office and saying, "Play." 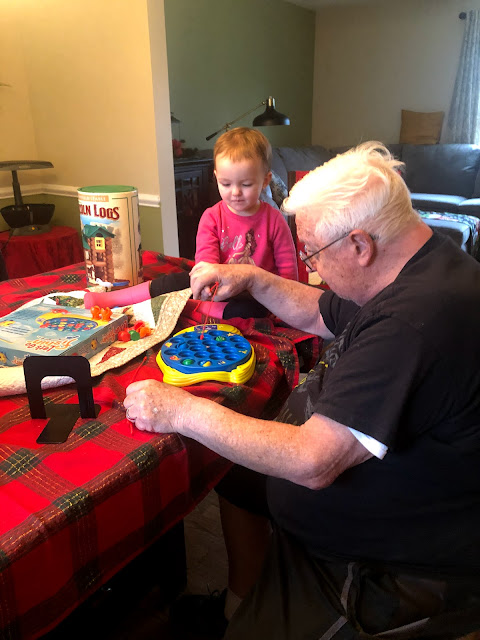 Oh, she's such a charmer.

When the week finally slowed down,

On Saturday we went to see Locklan riding the unicycle.

He's getting closer and closer to becoming proficient!

Next we went to a boat show to check out a new dock for Camp Manfred...

I think we're going to invest in it.

After that excitement, Mr K and I got some dinner and headed for
Butler Little Theater where we saw the play
Lunch Hour by Jean Kerr
(of Please Don't Eat the Daisies fame)

When we went to check in, they could not find my name...

Finally, the theater manager did find it...

Fortunately, she was able to exchange our tickets!

We really enjoyed ourselves and will do it again for sure.
.
Also, Saturday evening, Tony sent me two photos of Henry.

He learned how to open the gate at the bottom of the stairs...

AND learned how to open the kitchen cabinet and climb inside.

Last night, he sent a video of Henry taking his first steps!

I guess he decided he didn't want to be a baby anymore.

Today Locklan doesn''t have school so
both he and Teagan will  be here all day.

Now I'm off to try to make peace with my phone!

I'm really busy, but thought I'd share this photo of Henry. 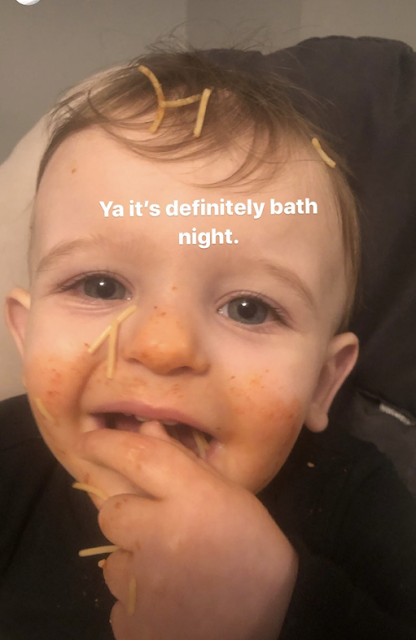 I get such a kick out of Tony's captions...

Back in a day or two!

Our family, or at least Andy and Tony
are unicyclists! 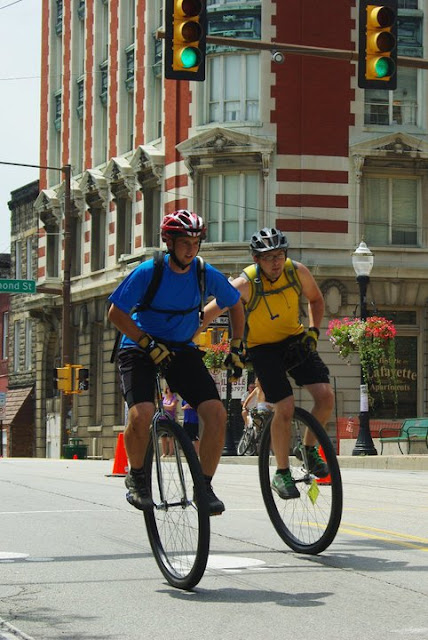 Tony on the left, Andy on the right, participating in a cross country race.

And now, we're adding another generation to the unicycle family... 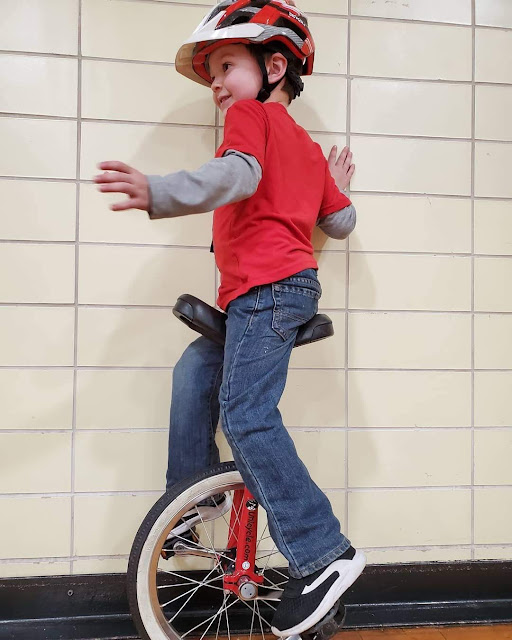 Our town has a unicycle club.
Every Saturday they take over the gym at the YMCA

They welcome anyone who rides or wants to learn!

They have unicycles of all sizes to try.

The World According To Locklan

Every Monday and Wednesday
Andy takes Locklan to pre-school,
Drops Teagan off at my house and heads to work.

A few hours later, I load Teagan in the car
and go to fetch Locklan.

Teagan usually falls asleep before we get to the school
so Locklan and I have time to chat.

Occasionally, we'll take the long way home so she can sleep longer.

Occasionally, we'll detour through the drive-through window at McDonalds
for coffee for me and fries for him.

Yesterday, we did that.

Locklan is sitting in his car seat munching on his fries.

Suddenly he asked if there were mashed potatoes
inside of French fries.

I explained that both were made from potatoes.

He then said he can't eat the fries because he hates mashed potatoes.

We started talking about lunch.

I suggested macaroni and cheese.

He said he can't eat that.

He explained he could only eat the good kind that his mother makes in a pot,
not the bad kind I make in the microwave.

I bought this police station/fire house off of Facebook last week.

The kids played with it all afternoon. 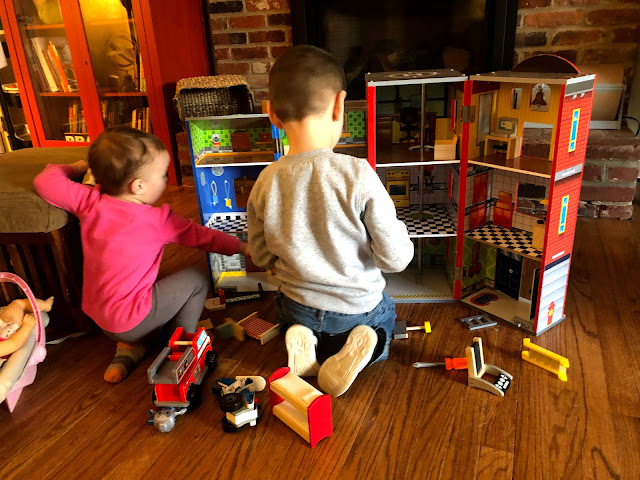 It folds up with all the furniture and vehicles inside.

AAAAAAnd before we knew it,
Andy came to get them.

Teagan gathered up her baby and purse 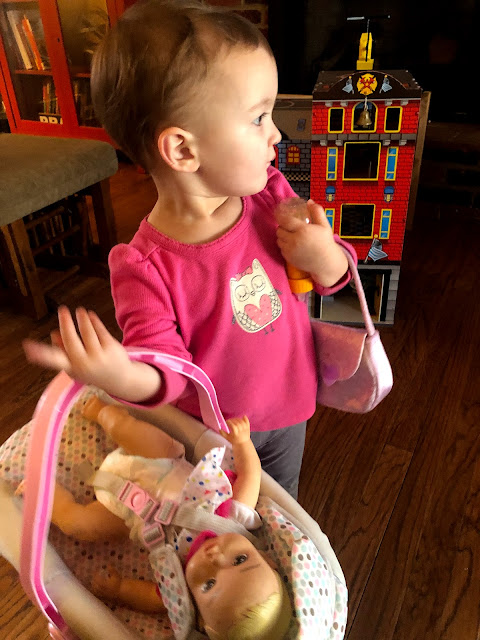 And I needed a nap!

Labels: a day in my life, Andy, grandkids, grandma life, Locklan, out of the mouth of Locklan, Teagan

Stop the World, I Want to Get Off!

Whew!  How long has it been?

Was I really MIA since December 20?  How could that be?

We did go to the party at Mark's nephew's house and had a good time...

Considering we had kids...lots of kids!

We had 7 kids with Locklan being the oldest of them...

I felt grouchy and couldn't wait to go home!

I had a schedule so that all my chores and Christmas duties could be completed
at a pace that was not too demanding.

Saturday, I felt worn out but agreed to have my little buddy spend the night.

We blew up the air mattress and slept under the Christmas tree... 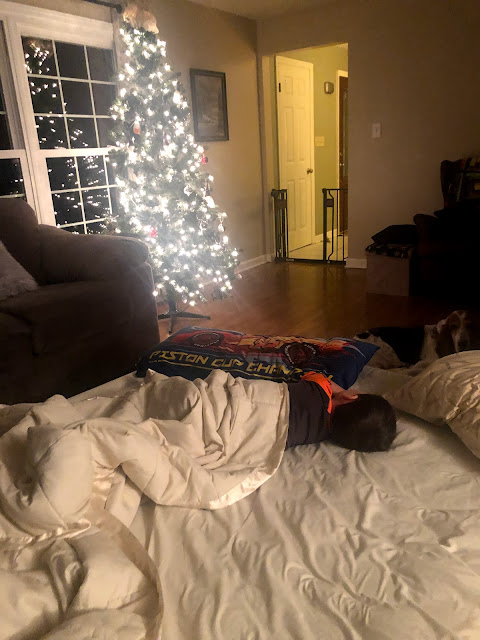 On Sunday, Andy came to reinforce the gate connection to keep Teagan and the dogs from running up the stairs. 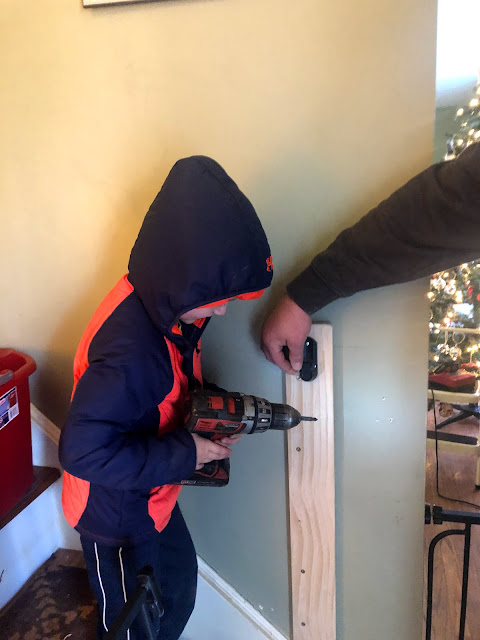 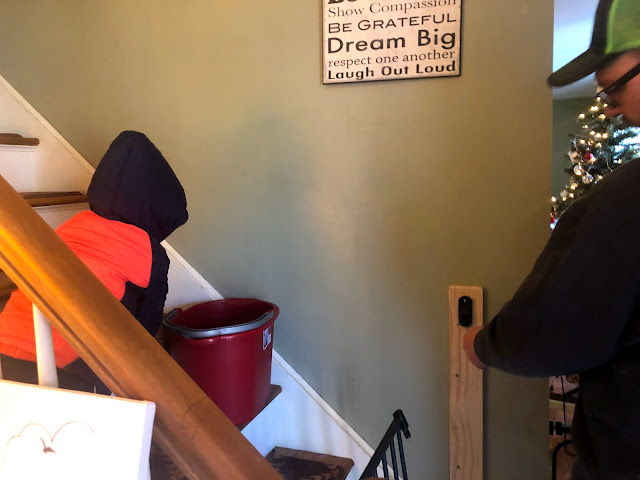 Andy is so patient with him!

I was feeling like I had been dragged through the mud so I fell slightly behind on my schedule...

Monday, I woke to find Andy and the kids, the cleaning people and Ron all needing my attention.

I went back to bed and slept 16 hours!

On Christmas eve, I was up before the chickens
and managed to have everything done by time my
family arrived at 5.

We had 14 people here for dinner.

The only person missing was my oldest grandson, who turned 27
that week.

It was amazing, and no, I don't have a plethora of photos.

I was too busy loving it.

More later, but before I go, here's a picture of Henry, who is quite a character... 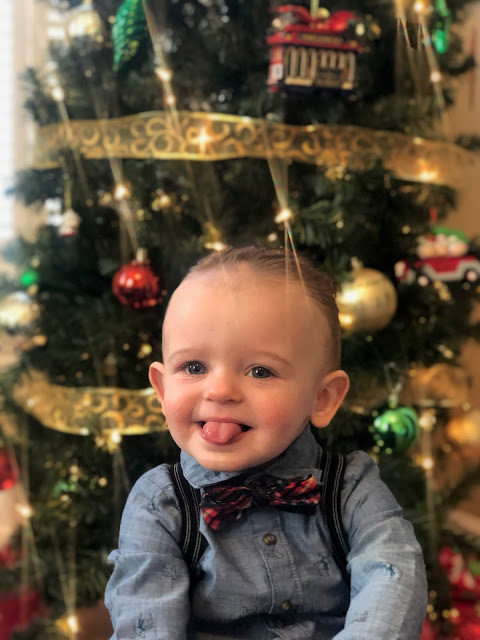 I'm off to get ready for breakfast with friends!

I can't believe that Christmas is almost here.

I've been busy, had to take mom to the oncologist
(where Teagan and Locklan entertained everyone in the waiting room).

Mom had been complaining about feeling drained and fuzzy headed.

She chalked it up to being 88.

Her doctor sent her to the hospital for a blood transfusion!

They gave her 2 units of blood and she says she feel like a new, 88 year old, woman!

I still can't get around very well, but it's so much better than if was 4 or 5 months ago.

I downsized my decorating...

Went from 5 trees to two, one inside, one outside...

The inside tree has been decorated, undecorated and redecorated several times...

I let the kids do it! 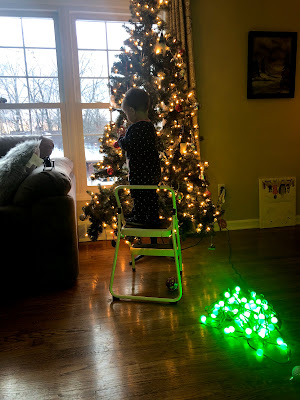 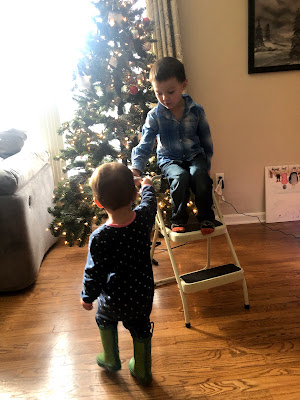 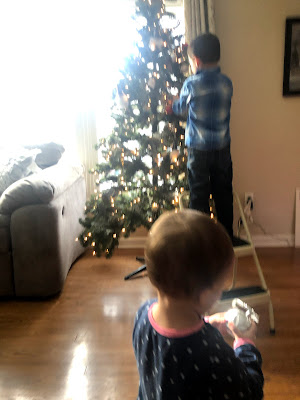 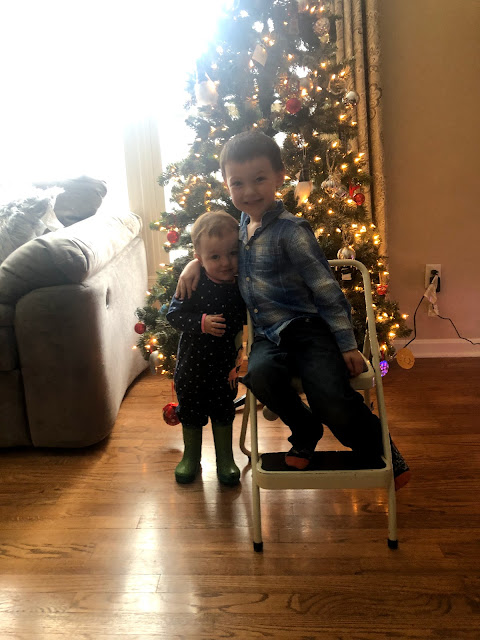 A couple of years ago, I bought a Tree Dazzler after Christmas for $5
and promptly forgot about it.

I found it this week and got it out for the kids... 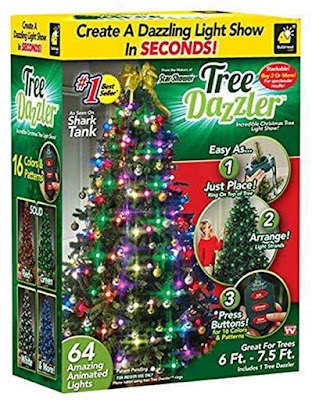 They decided it was more fun to decorate themselves... 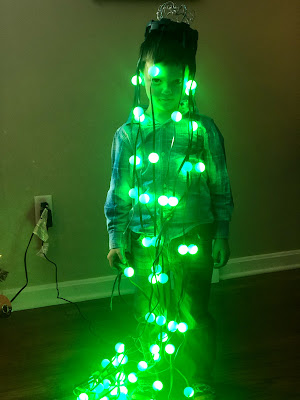 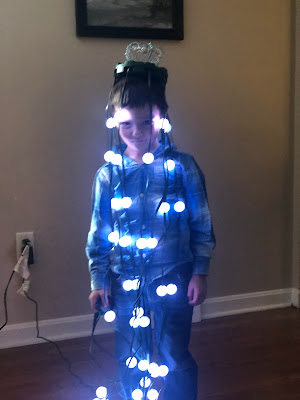 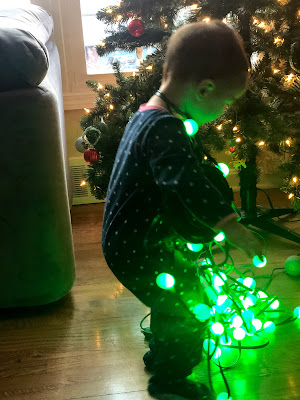 We took the kids to the mall, just to walk by Santa.

Locklan actually talked to him, from a distance.

I had some shopping to do, but to leave the mall, we had to walk past Santa.

He saw us and waved and said bye bye.

Teagan waved and said bye to him.

The next day, she pointed to a picture of Santa and said Santa!

I asked her what Santa said. 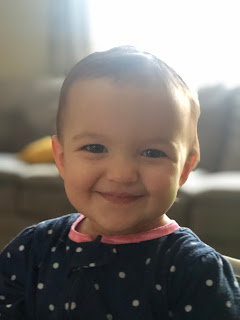 I'm done shopping but have not begun to wrap...

I bought a gift for Ashley from Amazon...

I checked online and it said it had been delivered to my mailbox!

I sent Mr. K out to retrieve it.

It was not there!

I did, still no gift.

I called Amazon, talked to a robot who authorized a refund on my credit card.

It came in two days

The original came two days after that,

The envelope had been torn open, wrapped in packing tape
and held together with a rubber band!

Someone opened it (hopefully by mistake)
and decided I deserved it.

I think I have as many returns as I do gifts!

Tonight we're going to a party at Mark's nephew's house.

I feel so blessed that the family still includes me.

Now I have to find an ugly Christmas sweater!

Wow, guess this isn't all that short.

Hope it was sweet!

I've always loved the hustle and bustle of the Season...

This year, it's a little different...

It's taking me ten times longer to get things done...

I have to rely on Andy or even Mr. K to help me do things...

Still, having little kids around makes it all so much fun!

We do Christmassy things,

But we also do 'life' things.

Teagan is at that age where she identifies her dolls as people... 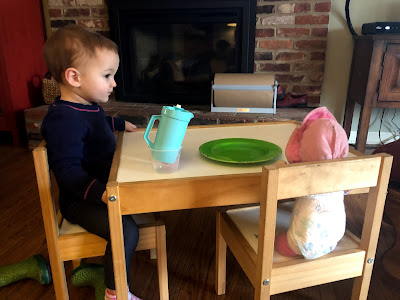 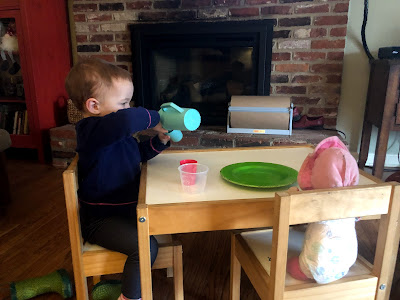 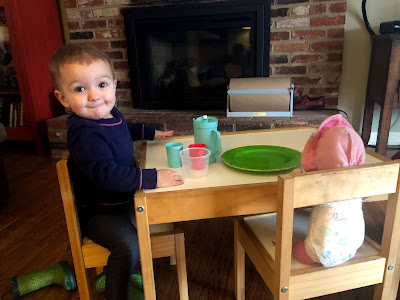 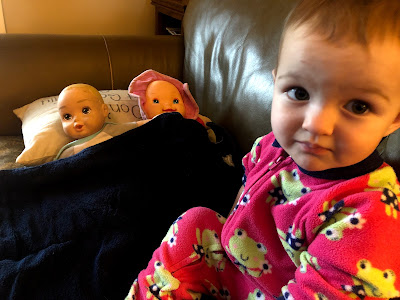 And when I suggested it was nap time,

She thought it was a great idea... 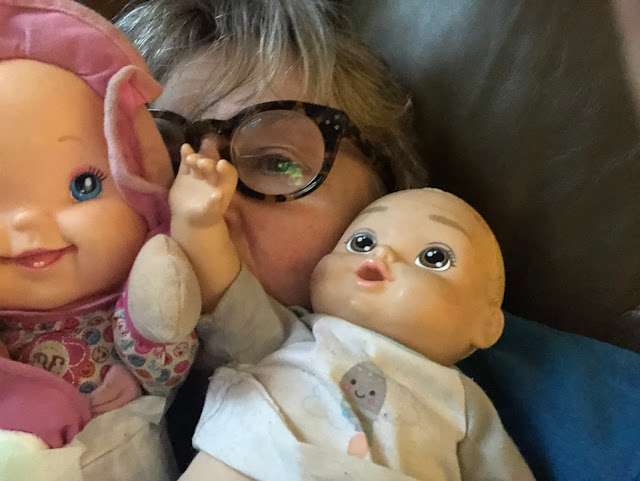 For her kids too!

Yesterday Locklan didn't have school, so he came along to spend the day.

It was cold and ugly out there, so we stayed in and snuggled... 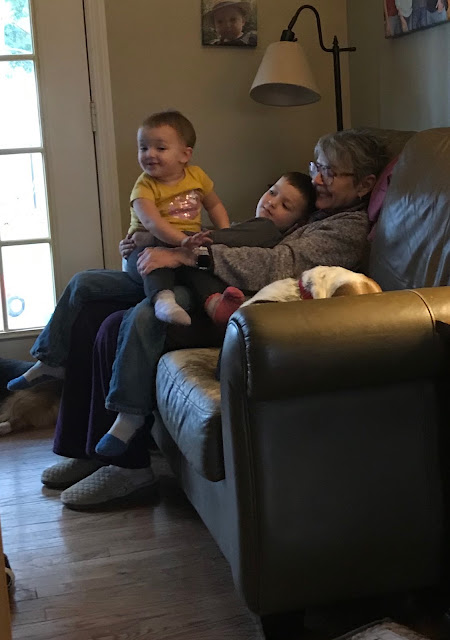 I am working on a few 'secret' projects...

I can't say much, but one led me to rediscover things like this... 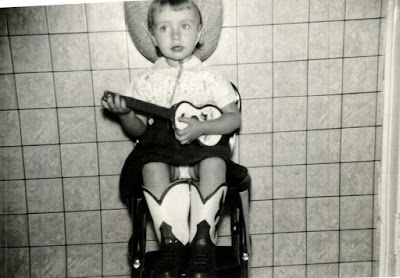