Butler, PA, our home town, is rapidly becoming a bicycling town.  Not only do we have designated bike routes, we have Friday night community rides, easy access to Rails-to-Trails, and bike racks in front of businesses on Main Street where you can lock your bike while eating or shopping.

Andy and some of his friends (mostly fellow unicyclists) were commissioned to make three bike racks out of recycled bike parts.  After working hard, they were ready to install!  Mark and I went downtown (in his car, not on bikes) so Mark could help if he could and I could take photos, of course!

The greatest thing about the installation is that the workers showed up ON BIKES! 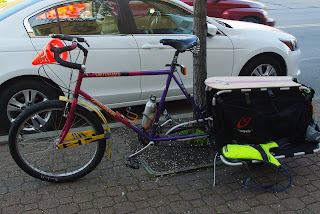 Dave brought the tools on his transporter, 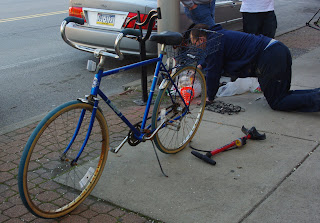 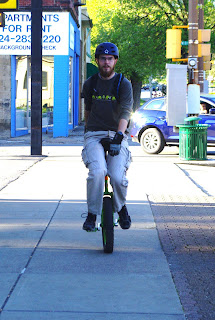 Isaac came on one wheel, 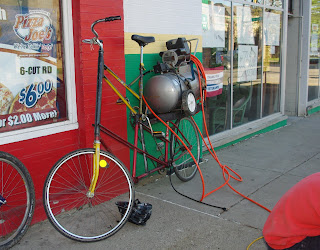 and Andy came on 'Big Dumb Bill' a tall bike with an air compresser on the back.

What do you say when you see a kid pedaling a five foot tall bike with an air compressor on the back?  You say, "Hi Andy!" 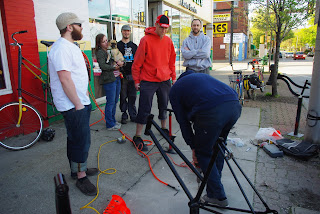 They did attract a crowd of well wishers, nosey people and advice givers, but it was an upbeat atmosphere.

It was hard work drilling into the sidewalk, but there was lots of people there to give a hand... 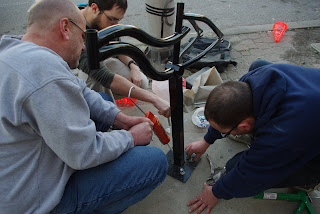 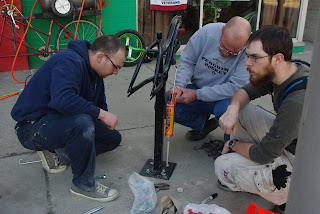 They even put Mark to work! 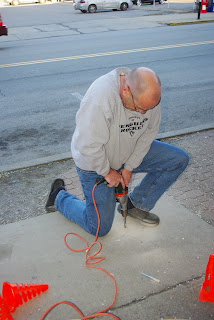 At the end of the evening, Pizza Joe's had three great bike racks.  Kudos to the guys! 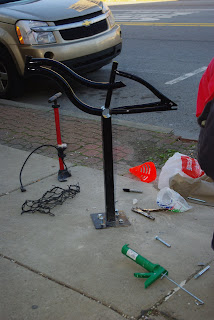