As I was leaving Wal Mart this afternoon,  I met Corky and Ruby standing at the front entrance. 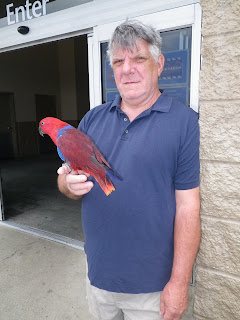 I've seen them out and about before, but never on a cool, breezy and sunny day like today.  This time I stopped to talk to them.  Ruby is a three year old ...(I forgot to ask) red bird with blue feathers.  It is pretty obvious she is the love of Corky's life, while he talks, she bobs her head up and down as though she's agreeing with him.
He explained that with a lot of good care and love, she can expect to live to be seventy five!  He set her on my arm and she stared at me and then started nibbling at my beaded watch band.  I wispered to her that if she ate it, she would have sparkly poop and she stared at me and said quietly, "Poop."
There were several children around with their parents.  One by one, Corky moved Ruby from arm  to arm until each child had a chance to see her up close and stroke her head while the parents got out their cell phones and cameras and stapped photos! 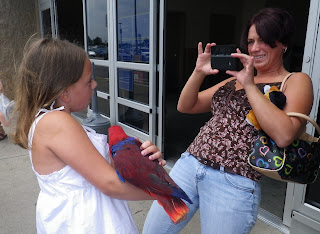 Thanks, Corky, for introducing your lovely lady!
Posted by Jan at 8:00 PM