Road trip!  From one wheel to four and back to two?

One of the best 'touristy' things (the best thing was the people we saw) we did on our trip was... 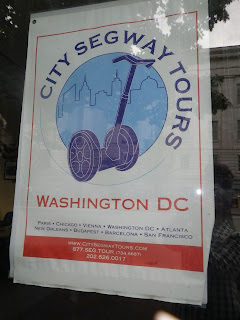 We saw Washington, DC by segway!  What a blast!  I had this bright idea that we should try it and booked a three hour tour, with instruction and tour guide, over the internet.  I wasn't sure how it would work out, but I figured if the kids could ride around on one wheel, pedaling all the time, surely I could ride on two if all I had to do was stand there...


The company limits groups to 8 people.  Our group of 6 was just the right size.  There was Mark and me and a family of four from Perth Australia.


Before the tour started, they made us watch a video of what not to do...don't get too close to the edge of the pavement, don't lean forward too far, don't lean backwards too much...be careful not to get too close to other segways, no cell phones, etc.  The consequences were illustrated with a cartoon character falling forwards/backwards on his head.  Scary!


Kaitlyn, our tour guide, took us outside for instruction/practice. 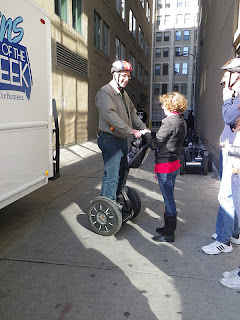 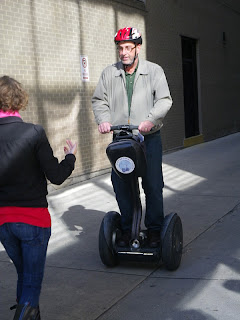 I was nervous!  By time it was my turn, I was shaking but Kaitlyn assured me I would be fine, but just to be sure, she told me that we would travel in single file and that she would like me to stay right  behind her (like the bad kid on the school bus?).


Sadly, my camera spent most of the time in the bag on the handlebars.  We were warned not to try to take pictures while driving, and it would have been a little difficult to photograph the first mishap...I ran my segway into another segway while trying to navigate a curb cut.  No damage or injuries, but a renewed fear of being out of control! 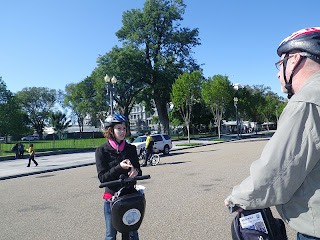 Kaitlyn told us that all tour guides had to be licensed and that she had to take a test.  She certainly knew her stuff.  She was an excellent guide, taking us from monument to monument, navigating traffic and sharing history and current events. 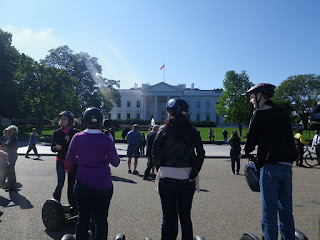 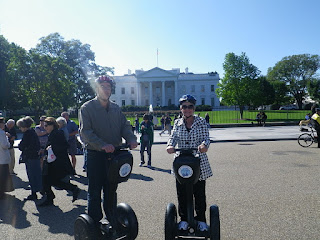 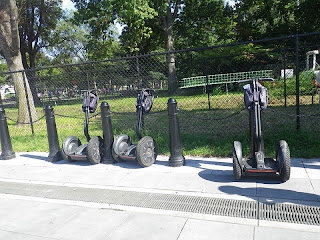 At the Lincoln Memorial, we stopped for a break (it's not easy standing still that long).  We walked around the Korean Memorial 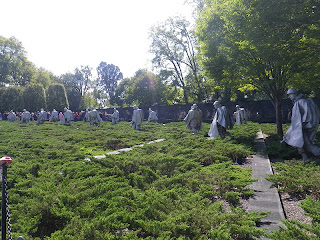 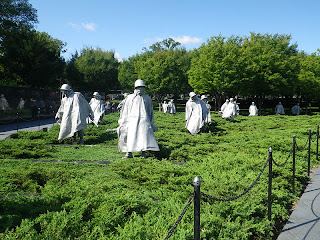 and a few other places.  We climbed the stairs to the Lincoln Monument.  Sadly, the reflecting pool was empty.  They are working on it. 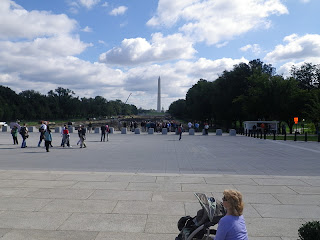 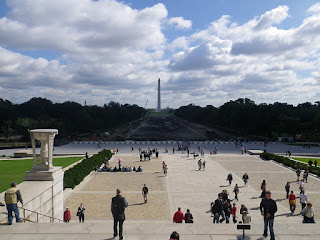 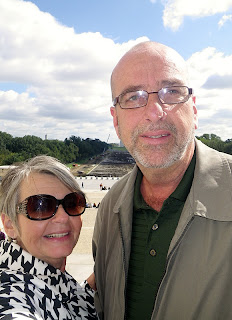 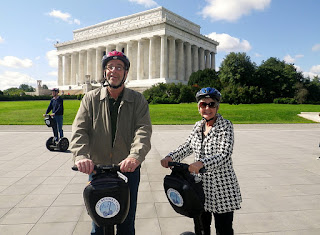 On our way to the Capitol, I felt confident enough to move to the back of the line and travel with Mark.  We were heading across the Mall on a gravel path when Mark commented he thought he could 'peel out' on the gravel.  I should have run...
I did not, he did and he performed the first and only 'roll over' of the tour...NO, he was not hurt; NO, I did not get a photo, but I did get the giggles! 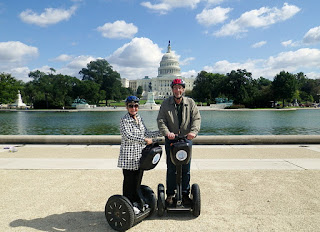 What a blast!  Would I do it again?  In a heartbeat!  In fact, we're planning to do a family segway tour of Pittsburgh in the next few weeks!  Why don't you join us?
Time to go!  Mark is at the river waiting for me to join him...our time there for the year is coming to an end but this weekend the weather is supposed to be perfect...
See ya later!  Have a good weekend, drive carefully and look both ways before crossing!
Posted by Jan at 9:36 AM

What a blast!
I would do this in a heartbeat too! Glad no one was seriously injured.
Have so much fun on your next trip, and be certain to take a few pictures.